President George W. Bush was an exciting biography for me to work on. I wrote almost all of the first edition before the election of 2000. At the same time, I was also writing a biography of Al Gore, the Democratic presidential candidate.

The idea was that immediately after the election, Simon and Schuster would publish the biography of the winning candidate. On Election Day, my editor and I stayed up all night, thinking we were going to finish one biography or the other so that it could be published immediately. 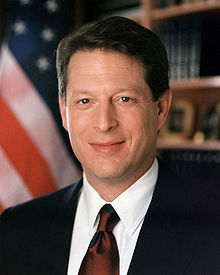 As a souvenir of this whole experience, I had those two book covers framed together and hung them in my
office. And I still have my unpublished biography of Al Gore (minus the last chapter in which he wins the election of 2000!). 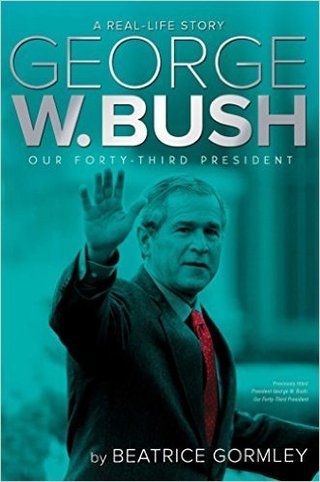 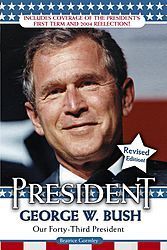 Our president, George W. Bush, once said: "I never dreamed about being president. When I was growing up, I wanted to be Willie Mays." George W. was born in 1946 and grew up in Midland, Texas. He attended high school at Andover, then college at Yale University. He trained as a fighter pilot in the Texas Air National Guard before beginning a career in business. He then turned to Texas politics and served as governor there from 1994 to 2000. He became president as a result of the contested election of 2000.

In a new update, this young reader's biography of the forty-third president of the United States now covers President Bush's first term: the tragedy of September 11, 2001, the war in Afghanistan, the war in Iraq, and the election of 2004.

Children's Literature
"This first children's biography of President George W. Bush covers the new president's life from his childhood through the hotly contested 2000 election. The story is presented with clarity, and the author takes a matter-of-fact approach to describe a life that has alternated between circumstances of extreme privilege and those more typical of small-town middle America. . . . "The focus is about George W. Bush the person (conservative, personable, extremely loyal to family) rather than about the political conflicts of the times."
Reviewer: Sally Heldrich

School Library Journal
Gr 4-8-A brisk and informative biography. Gormley delves into Bush's childhood, his famous family, his bumpy road as a student, and his equally bumpy road to the White House. She discusses his lifelong adulation for his father, who, as both a congressman and president, gave George W. a front-and-center view of high-level politics. . . . Bush's story is inspirational if nothing else."
Reviewer: William McLoughlin