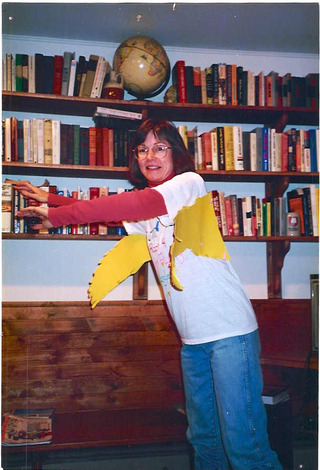 Fourth graders in Vacaville, California made these wings for me. Would you believe they really work? 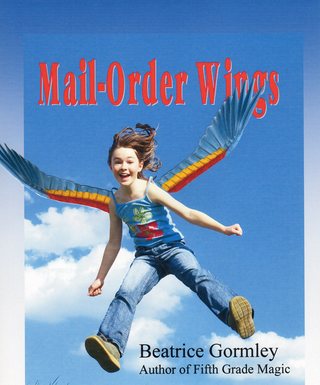 My first book, now an e-book!

"Fly with your own wings!"

said the ad on the back of Andrea's comic book. Even though she knew people couldn't really fly, Andrea decided to take a chance.

"Everybody will love this delicious story. It is fanciful and simple, delicate and comic, with a haunting touch of wildness." --Jane Langton

"A fast-paced story with a spirited heroine and enough buoyancy to keep anyone who fancies flight." --Booklist

"Gormley's first book should be the cornerstone of a distinguished career." Publishers Weekly

Read an excerpt from Mail-Order Wings:

Chapter 1: I Want to Fly

Here Andrea stopped. She didn't have a checkbook, but Mother did. Andrea could give Mother the money, and Mother could write the check. That's what they'd done when she sent away for the Treasure Chest of Magic.
Except that Mother wouldn't do it this time--Andrea was pretty sure she wouldn't. "I can't let you waste your money like that, Andy," she would say. "Didn't you learn anything from the Treasure Chest episode?" Dad would be even harder to persuade than Mother.
That left Jim, who was sixteen. Andrea didn't think he had a checking account, but he would probably know how to get a money order. Would he make fun of her? He might. When he noticed her at all he treated her as if she were a silly puppy or something. On the other hand, she didn't think he would care whether she wasted her money or not. It was worth a try.
Andrea cut the form out of the comic book, pushed back her chair, and tossed Chilling Tales onto the top shelf of her closet. Then she hurried to the window. Pushing up the screen, she leaned out the window so she could see the driveway. There was Jim, shooting baskets.
Andrea pattered down the two flights of stairs and ran out the kitchen door to the driveway. Jim was hooking a shot at the basket. "Hey, Jim," she yelled, and he missed.
Frowning, he caught the ball as it slid off the garage. "What d'you want, shrimp?"
"Well, I was just wondering if you would help me get a money order."
Jim didn't answer--he just stood there, one hand in his pocket and the other bouncing the basketball at his side.
"I need it to send away for something."
Jim shrugged. "Give the money to Mother. She'll write a check for you." He turned away, rose on the balls of his feet, and shoved the basketball into the air in one neat motion so that it dropped cleanly through the basket. "Nice, Reve, nice."
"No, she won't." Andrea stepped in front of him to make him pay attention. "She'd say it was a waste of money."
"Oh, good. So you want me to drive you to the post office to get the money order so Mother can get ticked at me for helping you waste your money." He looked at her with one eyebrow raised. "What're you sending away for, anyway? A nuclear weapon kit? Let's see." He reached out for the form in her hand.
Andrea stepped back, holding the form behind her. "Why can't you just--" She stopped. "The post office? That's where you get money orders?"
"Yeah, didn't you know that?" Jim looked at her sharply, then twirled the basketball up into the air and caught it, smiling to himself. "Well, Mother, I just blew it. Sorry. Sport, you're smarter than I thought." He dribbled the basketball down the driveway.
Andrea ran back into the house and all the way up to her room, skipping every other stair. Hooray! She could send for the wings by herself. She took the cork from her pig bank and coaxed out the ten-dollar bill with a pencil, stuffed the money into her shorts pocket, and dashed back downstairs. Grabbing an envelope and stamp from Mother's desk, she ran out to the garage to get her bike. As she wheeled it down the driveway Jim called, "Way to go, squirt! Waste that money!"