Back to the Day Lincoln Was Shot! 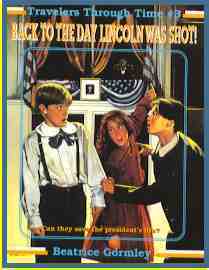 That's what everyone says, but Matt and Emily's grandfather has invented a way to travel back in time. Now Matt and Emily, and their scientific genius friend, Jonathan, are about to take a trip to the night President Lincoln was shot.
They arrive in Washington, D.C., in 1865, and start immediately on their mission: to prevent President Lincoln from being assassinated by John Wilkes Booth. Matt visits Mrs. Lincoln; Emily goes to Ford's Theater; and Jonathan goes to see the president himself!
Can the kids convince someone to listen to them? Can they really change history?

How I researched Back to the Day Lincoln Was Shot

To research the facts about President Lincoln's assassination, I traveled (by car, not TASC) to Washington, D.C. Ford's Theater, where Lincoln was watching a play the night he was shot, is still there, and it's been restored to look the way it did in April, 1865. I could walk around the theater and imagine just how it would look to Emily and Matt and Jonathan in my story.
I also studied maps of Washington, D.C. in 1865 to figure out where my characters would be at different points in the story. I was surprised to see how close Washington was to the borders of the Confederacy (only a few miles). No wonder the Confederate Army almost captured the capital of our country during the Civil War!