When I discovered Maria Mitchell, the first woman astronomer in the U.S., I couldn't believe I'd never heard of her before. Why not? In the nineteenth century, she was famous as an accomplished astronomer and as a badly needed role model for women who wanted to be scientists. Why didn’t everyone know about her now? Obviously, I had to write a book about her and get a lot of people to read it!
So I started out simply admiring Maria Mitchell, but as I worked on the book, I became very fond of her. Maria had a quirky sense of humor. She was a loyal friend. She was brave in standing up for the truth, but modest about her own achievements. She thought for herself. She made her students at Vassar College work hard, but she also looked after them, and they all loved her.
If you read this book, I'll bet you'll get to like Maria Mitchell as much as I do!

Maria Mitchell: The Soul of an Astronomer 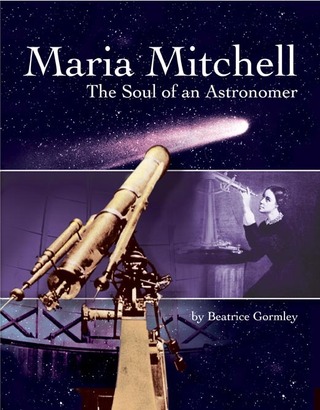 In the mid-1880s, a time when women were often thought to be unworthy of higher education, Maria Mitchell rose above the prejudices of the day to become America's first professional woman astronomer. This exciting biography tells the story of Maria Mitchell's life, her amazing achievements,and her faith that saw God's handiwork in the heavens.

"Maria Mitchell: The Soul of an Astronomer is a marvelous biography."
David Baron, author of American Eclipse: A Nation's Epic Race to Catch the Shadow of the Moon and Win the Glory of the World.

"This is an extraordinary book about an extraordinary woman! Maria Mitchell broke through myriad barriers of the mid-nineteenth century to become a world-renowned astronomer (discovering Comet Mitchell) and professor at the first U.S. college for women, Vassar. Her inspiring biography describes her fight for intellectual integrity and women's rights."
National Science Teachers Association, Outstanding Science Trade Books for Students K-12, 2004

"This fine biography details the life oa America's first female astronomer. . . Her story is an important contribution to women's history and offers encouragement to young women considering astronomy as a career."
Booklist

"Gormley successful paints a picture of a world that failed to mold Mitchell to its standards, focusing on the telling details that bring the story to life. Inspiring and incisive."
Kirkus Reviews

"With a smoothly flowing and lively style, this biography introduces readers to the 19th-century astronomer. Well-chosen, primary-source quotations and quality black-and-white photos add authenticity to the text."
School Library Journal